Originally and best viewed on atavist at https://cobbastevens.atavist.com/the-future-of-port-phillip-bay

What challenges will the Bay face over the next half century?

Port Phillip Bay is Australia’s most important body of water.

Sure, it may not have the same glamour as Sydney Harbour or as much prestige as the Great Barrier Reef but the 25 cubic kilometres of water that lies at the feet of Melbourne is a an incredible ecological marvel and a vital trade thoroughfare for Australia’s southern states.

Though the future of the Bay remains on a knife-edge. Caught between competing interests, the Bay finds itself uncomfortably lodged between the interests of the economy, society and the environment.

The Port of Melbourne is the busiest port in Oceania and is ranked 58th in the world in terms of TEU (Twenty-foot equivalent container units) traded.

Environmentally, Port Phillip is home to over 300 different species of fish and hundreds of species of molluscs, crustaceans and corals. This fragile ecosystem is one of Australia’s most diverse in terms of habitats and shelters many rare organisms unique to the region.

Socially, the beautiful bay attracts thousands of visitors annually who enjoy the recreational pursuits of fishing, diving, sailing and swimming that this pristine environment has to offer.

The bays recreational use is important to all of society – Mt Martha South Beach (Photo: Jake Stevens)

Well, we know already Melbourne’s population is set to surge in the next two decades. But critically, it’s predicted that Melbourne’s consumption for imported goods will rise even further.

Trading Economics forecasts Australian imports to rise to $3.26 billion AUD by 2035, a 9.8% increase on today’s figures. These numbers alongside predictions that consumer spending will rise, highlight the imminent economic growth Melbourne is set to experience.

However, statistics produced by the Department of Infrastructure and Regional Development indicate that these figures could even be substantially higher.

Over the past decade the total volume of international containers arriving in Melbourne has increased at a huge 7.1% annually, suggesting that in two decades time, the Port of Melbourne will receive four times as many container units than they currently do.
https://public.tableau.com/javascripts/api/viz_v1.js 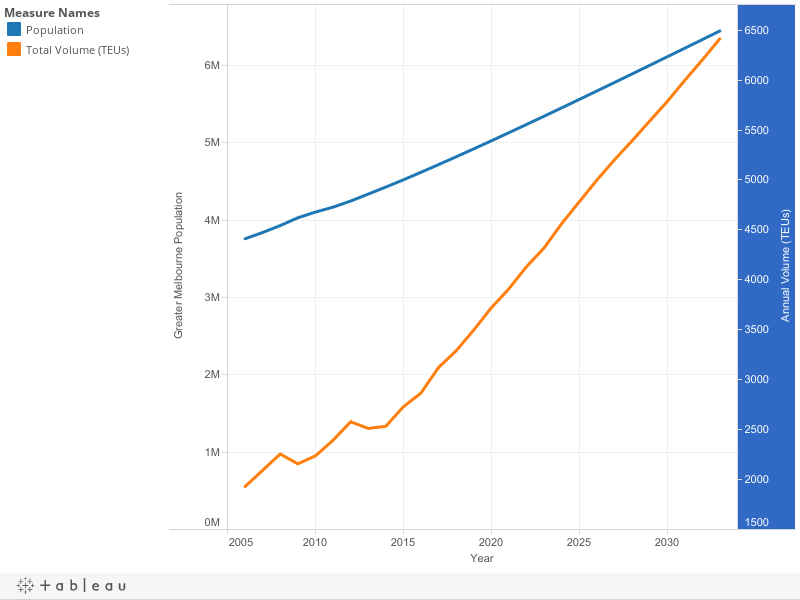 Highlighted in PoMC’s report, “Port Development Strategy: 2035 Vision”, Tim Pallas, the current Victorian Treasurer and former Minister for Roads and Ports admitted the daunting task this extreme growth presented: “This expected increased trade will need to be accommodated within a limited area which is currently around 510 hectares. The Port Development Strategy seeks to utilise this land as efficiently as possible, but it remains a challenging task to overcome.”

Geography and the future of container shipping

It’s indeed a very tough ask for a bay which is geographically difficult for accommodating for large ships.

Mother Nature never anticipated the Bay to have such large ships traverse its waters. Saucer-like in shape, the Bay, which may have been dry 8000 years ago, is very shallow with a maximum depth of 25 metres.

Further south, the rocky entrance to the Bay known as ‘The Heads’, is just 3.5 km wide but reefs projecting from these points reduce the navigable width to about 1 km, making it an extremely difficult passage to pilot.

Unable to accommodate so called ‘5th or 6th Generation Mega-Ships’, the Port of Melbourne sought out government permission to dredge areas of the channel to allow newer ships with greater drafts access to the Bay.

A container crane at the Port of Melbourne facilitating large ship in port (Photo: Wongm via wikicommons)

But it’s very much assumed that the future of shipping will include a range of different sized ships, as containers with a load of 10,000+ TEUs are unable to access many ports around the world.

As Dr. Jean-Paul Rodrigue from Hofstra University in New York concludes, “Containerships in the range of 5,500 to 6,500 TEU appear to be the most flexible in terms of the ports they can access”, but with larger ships requiring fewer port calls, a dynamic approach to the future of shipping could be the most efficient solution for the next few decades.

Is another container port possible?

The Queen of the Netherlands, the dredger that was used in the Port Phillip Bay Channel Deepening Project in 2008. (Photo: Mvjs via wikicommons)

Peter Harry, The Port of Melbourne Corporation’s spokesperson was categoric in ruling out any future dredging plans.

“We don’t foresee any further dredging that should need to take place for the Port of Melbourne in the future, furthermore, any dredging that was to be done, would be subject to stringent environmental guidelines,” Harry said.

It’s a rather surprising statement from the PoMC, given that recent suggestions for an alternative container port at Bay West, between Werribee and Geelong, would require unprecedented amounts of dredging to occur.

An investigation from the Department of Transport, Planning and Infrastructure concluded that 66 million to 84 million cubic metres of material would be required to be dredged for incoming ships – almost four times the amount that was dredged in the 2008 channel deepening project.

The dredging in 2008 would pale in comparison to the suggested amount of dredging that would need to occur if Labor’s Bay West proposal continued. A report from the Port of Hastings Development Authority suggests that only minor dredging of 9 million cubic metres would be required for larger ships to access.

Can the Port of Melbourne cope with the growth?

And what are the alternatives?

Peter Harry, The Port of Melbourne Corporation’s spokesperson backed PoMC’s ability to cope with any future rises in imports.

“The Port of Melbourne certainly expects future ships to be much larger in the future, and we look forward to accommodating and facilitating their arrivals,” Harry said.

“We have detailed framework and development plans in place to ensure that the Port of Melbourne is able to handle any future increases in shipping,” he said.

While PoMC remain confident in their ability to handle these increases, many others, including the both sides of State Government recognize the need for a second container port for Melbourne.

One such proposal is to upgrade the Port of Hastings, a deep water port in Western Port Bay. A complimentary but competitive alternative would certainly ease any pressure from the Port of Melbourne, but major works would need to be completed at Hastings including upgrading road and rail and further environmental testing of the proposed area, which could take up to 15 years.

Though acting sooner rather than later would be a priority for such a project. Modelling by KPMG suggests that the Port of Melbourne may only have a conservative capacity of 5.3 million TEUs, a number far less than what is expected in the coming years.

Modelling suggests that the Port of Melbourne may not be able to cope with the influx of increased trade predicted.Thus an alternative port development should be pursued.

Dr Hermione Parsons, a logistics expert at Victoria University says it’s an option that needs to be looked at, but any further dredging to accommodate for larger ships would simply be unnecessary.

Ships with a load capacity larger than 8000 TEUs may never even visit Victorian ports, as our market is too small.

“To say those ships will visit Melbourne is like saying a rocket to the moon will take a detour via Tasmania.”

What are the risks?

Jenny Warfe, spokesperson from the environmental group ‘Blue Wedges’ who fiercely opposed the 2008 dredging, also claims the government is being “short sighted” in its approach to the meeting the demand of container imports.

“We strongly oppose any future plans to dredge or further develop Port Phillip or Western Port Bays. The aftermath of the dredging saw 10 million cubic metres of sand, silt and toxic sludge dumped offshore from Mt Martha (and a further 13 million cubic metres dumped in the Northern spoil ground west of Mordialloc), two of the most important snapper breeding grounds in the Bay,” Warfe said.

Much of the erosion at Portsea beach has been attributed to changing wave patterns due to more water in the Bay following the dredging of 2008 (Photo: Dept Environment & Primary Industries via flickr)

“Not to mention the disastrous erosion that has seen Portsea beach been swept away. If an international company is successful in leasing the Port of Melbourne for the next 50 or 100 years, we have major concerns over their ability to run the port and their commitment in preserving the environmental health of the Bay,” Warfe said.

“Turning our bays into a profiteering business isn’t good for the environment and a dangerous reality for Victorians.”

Warfe even admitted that a source close to her in the maritime logistics industry believed that containerized shipping from Asia to deeper ports such as Brisbane, following land-based transport further south, was just as economically viable as further developing Melbourne’s ports to accommodate more ships.

“The truth is Port Phillip Bay was never meant to accommodate large ships. Alternative ports closer to Europe and Asia are more environmentally sustainable and economically viable in the long term.”

In 1996 the CSIRO completed the first and only major study into the health of the Bay, and the potential environmental risks it may face in the future. Whilst this comprehensive guide accounted a range of possible risks, a report which was written almost 20 years ago can’t be expected to oversee and prepare for the next half-century of management, especially given the current ports situation.

The CSIRO’s main concerns surrounding shipping included, “Exotic species that may require measures to prevent their spread in the Bay or to other ports”, “Suspended solids that lead to the siltation of navigation channels” and “Risk of spillage of toxic/hazardous cargoes that may require preventative measures”.

The Northern Pacific Sea Star is an environmental threat caused by the increase in shipping. (Photo: CSIRO via wikicommons)

When talking about introduced species, scientists and observers alike shudder at the story of the Northern Pacific Sea Star. First arriving from Japan due to a suspected ballast water carried by a ship in the late 1990s, the pest has invaded the Bay at the expense of the local mollusks and shellfish. With a ravenous appetite and a broad diet, the sea star remains a threat to local sealife and has no natural predator.

Many other introduced species present a similar risk to the health and biodiversity of the Bay, such as the Japanese Kelp and European Shore Crab.

Maintaining the Bay’s ecological biodiversity and ensuring tourism and recreational uses are protected were the key goals for the CSIRO and the government, but given the government’s eagerness to develop and prepare for the future surge of shipping, one can’t help but think the government has lost sight of what really matters.