Big thanks to Jame Hickleton for putting this piece together. Check out his work on his blog – in particular his weekly ‘Monday Gripe’ – some great stuff. Follow James on twitter at @JHickleton33

What a disastrous period in Australian cricket. How can this all be turned around? Well the right selections may be the first step, with the start of the third test at Old Trafford just hours away we still have no idea what the final XI will be.

Many believe Warner in for Hughes, Lyon for Agar and Starc for Pattinson. In my opinion it’s not that simple.

I’ve said on many many occasions now, Hughes will succeed in England. After a few failures my faith in him his slowly decreasing but it’s still there, just. The question is where does he bat? In my opinion he must be as close to the top of the order as possible.

The spin decision is also a difficult one, Agar, Lyon or both? I don’t think Agar can play despite making runs his job is to take wickets and he just isn’t doing that.

Where does Clarke bat? Some call for him to bat at 3, the people making those calls need to accept it’s not going to happen.

Then finally will Bird take flight at old Trafford? Who knows.

Here is my preferred side.

Chris Rogers doesn’t look to be up to test match level, in saying that though neither do many of the other batsmen, the difference is, age. Khawaja batted well at 3 but for the balance of the side I believe opening is a better option. He has a solid technique that should hold up as an opener, question is though can he stand up to it mentally?

Selectors need to stick with him. Although an average of just 17.8 in the past 5 tests is far from acceptable there is no question Hughes still has an enormous ability to make big hundreds which he has proven at first class level on a number of occasions. Transforming that into test hundreds is another thing, this process can take time and Hughes is yet to be given a long stint in the Test side to make this transformation. He needs to be given a role in the side for the next 3 tests and not be moved at all, and to me 3 is that spot.

193 for Australia A may have got him over the line and gained him a spot in the XI, but I feel the other attributes he brings to the side may have got him there more so. Warners aggression can at times get out of control but it is something this side desperately needs. Add to that his fielding and his undoubted passion and pride to wear the baggy green, Warner is a must.

Heading into this series I don’t think many of us thought about the possibility that Clarke may not make lots of runs. Well its happening and it’s safe to say the English have got the better of him. As Cobbas above infographic shows form is a slight issue for the Australian Captain. So how can we get the best out of him? The first step is surely batting him in the position he feels most at home. We need Clarke to score runs and his best chance appears to be at 5.

Smith has shown glimpses that he may be ready to arrive on the international scene. Like Hughes, patience is required and after a hundred a few days ago in the tour match he must play. Hopefully he can get over his back injury in time and take his place.

Still not sold on his place in the team, but with Matthew Wade failing in the tour match there is no other option. Haddin’s keeping can be relied on majority of the time, batting though could be an issue. We can’t rely on his batting to get us by, if a he can contribute great, but we need most of the work to have been done before he walks to the middle.

With Pattinson ruled out someone had to come in, Starc is in a way similar with pace and the ability to swing the ball when pitching it up. The added difference of bowling with the left arm I think gets him the thumbs up.

Our best bowler at Lords, doesn’t do a lot with the ball but yet he does just enough. Will play and in my opinion be the leader of the attack.

Petter Siddle has struggled since dominating day 1 of the first test, compounding his problem is the fact Ryan Harris has had success. Both Siddle and Harris are very similar and I believe only one of them can play. Bird deserves his chance after a great start to his Test career on home soil. His consistent line and length with the ability to be economical is something Australia needs. If given the chance I believe Bird may flourish on the big stage.

Still not sure why Lyon didn’t play in the first 2 tests, when confident he can bowl superbly and take wickets in clusters. Our best spinner since Warne deserves his chance in an Ashes Series.

It’s going to take a lot for the Aussies to turn this series around but it can be done.

The bowlers on tour have shown they can get the job done. Now though it’s up to the batsman to stand up. All are capable, it’s just a question of can it all click at the same time?

The top order batsman must put a focus on batting for long periods of time. Thirties and forties are not acceptable! Bowlers can’t be relied to cover for the batman’s failures. The aim should be declare before number 8 has to walk out.

Michael Clarke said we can still win the series and I must say I agree with him, it begins tonight it’s time to return the urn. 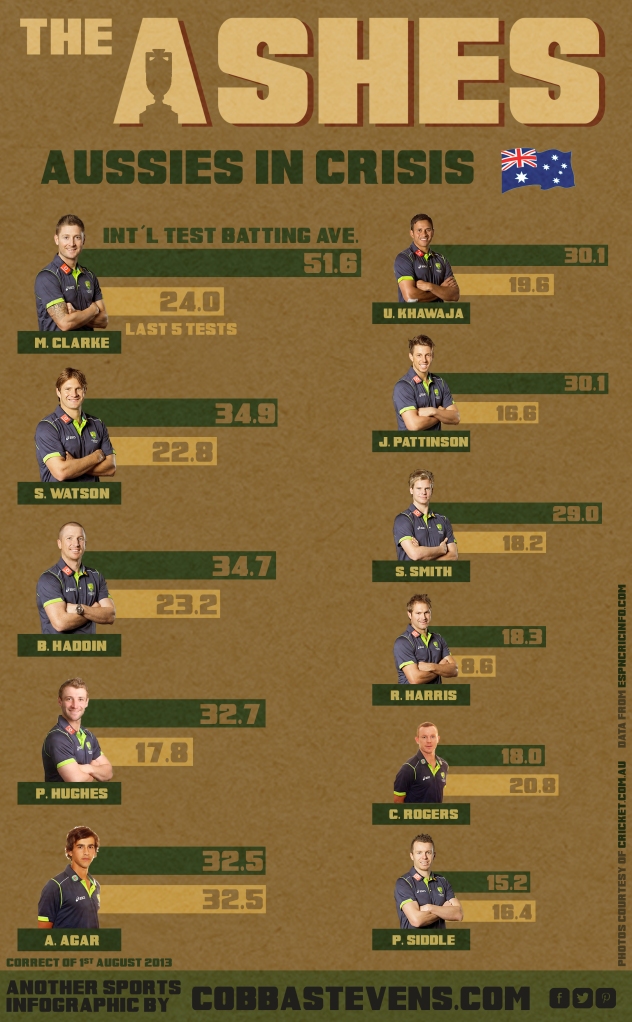 Have you got a view on my preferred side? Please comment below, or if you have an opinion about any aspect of the current side please don’t hesitate in having a say. Love to hear some other people’s thoughts.

2 thoughts on “Aussies in Crisis: What needs to be done”