Wow what can I say about the first Ashes Test? Not much that hasn’t been said already. There was individual brillance, power struggles, mistakes, controversy, everything that makes this contest and Test cricket one of the best sports in the world.

A lot has already been said, and a lot of opinion, whinging and analysis will be posted on various media and blog sites around the world. What I’ll do, is bring a different viewpoint on the game, and provide you with the raw and true facts and statistics that came from each Test match.

Over the 5 test series in England, and then again in Australia later this year, I’ll post a new stats graph following the last day of play. Similar to Cobba’s Footy Graphs, I now bring you the first edition of Cobba’s Ashes Graph.

In a heartbreaking defeat for the Aussies, England have claimed the first test of the English Summer Ashes series by 14 runs. To even get that close was a remarkable achievement as Australia’s last wicket partnership, Patterson and Haddin, needed an impossible 80 runs with only 1 wicket remaining.

Patterson batted in his number 11 spot, previously warmed up by test debutante, Ashton Agar in the first innings. In fact, so successful was Australia’s final wicket, that the combined score of the first 9 wickets was 348, whilst the 10th was 228.

Incredibly, Australia has seemingly relied on it’s tail-enders for some time yet, in the 17 Tests since the start of 2012, Australia’s 10th wicket has added 686 runs at an average of 40.35.

Playing at Trent Bridge in Nottingham, the English would have been nervous going in, as the team had won just 4 of the 20 Ashes Test matches that have been staged at the ground.

And at times, it looked like history wold repeat. Over 5 days the game ebbed and flowed, each team looking a likely winner. The heroic 65 in the final partnership between Haddin and Patterson was the 2nd highest 10th wicket partnership ever in England (if you know what I mean!)

And they came so close to victory! A questionable decision by the DRS after Haddin was originally given not-out gave the home team a nervous but celebrated victory.

As surprisingly spectacular Agar and Haddin was with the bat, Jimmy Anderson’s 10 wicket haul was slightly more predictable, yet still very impressive. It is the first 10 wicket haul in Ashes Cricket since Shane Warne in 2005 at the Oval.

Anderson can also lay claim to having the equal most catches dropped off his bowling since 2010/2011 Ashes. He shares the record of 20 with Sri Lanka’s Rangana Herath.

Although Jim Anderson was officially crowned as the ‘Player of the Match’, many observers saw Steven Finn’s contribution to the Australian Cricket Team as a worthy contribution. The man, over both innings (25 overs), got smacked for 117 runs with only 2 wickets (Economy: 4.68). There was 19 boundaries to the man’s name over both innings.

The match was England’s 3rd consecutive test they have won (Last in Sydney and Melbourne) against Australia, they have not won 4 in a row since 1985-1986. 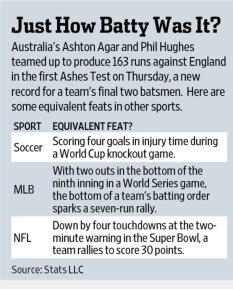 But for me (and most statisticians), the highlight of the first test was seeing a young, bright Aussie star emerge from seemingly no-where. He saved Australia in the first innings, and gave the team so much hope they almost came back-from the dead on the 5th day. So incredible was Ashton’s feat, that international news media were in awe.

In Agar’s incredible debut innings, he scored 35% of Australia’s runs, the highest ever innings from a number 11, was the only debutante ever to hit a half century at number 11 and holds the highest 10th wicket partnership ever with Phil Hughes.

PS. Did anyone else realise his first name was a combination of ‘ASHes’ and making a ‘TON’??