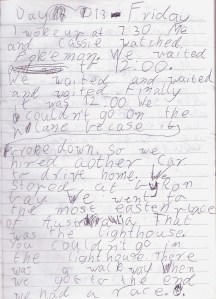 As you can clearly see, I definitely had the neatest handwriting going around. This is a page from my Diary I kept when I was on holiday on the Gold Coast. The date was September 11, 2001.

I still remember 10 years ago, when I was in grade 2, and I was still grasping the art of neat handwriting. Halfway through the year my family went on a holiday to Fiji. I loved it over there, and it was such a drag, coming home and getting back into school work. After the few weeks I had spent away, I remember sitting down in class and struggling to remember how to make my handwriting neater for the teacher. For me, it had been such long time away from writing anything, it took me a couple of weeks to get back to how I was writing before I had left for the holiday.

As in the workforce, many studies have proven workers who take regular time to relax are less likely to experience burnout, making them more creative and productive than their overworked, under-rested counterparts.

After all, all work and no play makes Jake a dull boy.

Could it be the same in the AFL? When teams take the week off during the bye rounds, how do they respond?

The Boss this week backed the bye round, saying “We need to make sure we are conscious of everybody getting the right break for work-life balance so that the back half of the season they are performing at the right level.”

I’m sure the players feel the same way too. Many players are even ‘rested’ throughout the season to ensure they are still fit and firing for the finals.

After all, we all need a mid-year break to fly over to the US to watch game 4 of the NBA finals series, don’t we Jimmy?

So, I thought I’d investigate in 2013 how teams responded after their short vacation from the game.

Scroll down to see Cobba’s Round 14 Footy Graph…

Last Monday on Fox Footy’s ‘On the Couch’ Jobe Watson confirmed that he received numerous injections of the anti-obesity drug, AOD-9604. The AFL showed little action in response, as Watson took the field as captain against West Coast at Paterson’s Stadium on Thursday Night. Despite the jeers of the crowd, courageous Watson racked up 29 disposals as his team came from behind in the last quarter to win by an incredible 7 points.

How many back to the wall wins can you have in a season? #AFLEaglesBombers

As Rogers Results show, it was also the 5th time Essendon has beaten West Coast with fewer scoring shots.

Home games for the Eagles are seeming to get tougher, as it was the 5th time this year they have lost at home, when during 2011 and 2012, they lost only 3 times.

The Dons now sit pretty half-a-game in front of Sydney in 3rd position, whilst the Eagles are left to contemplate their loss and now a last-ditch effort for finals from 10th, a game-and-a-half away from the top 8.

On Friday night, the SCG saw its 36th Friday night game between the Swans and Carlton. As the rain bucketed down midway through the contest, Sydney saw off a menacing Carlton attack to win by a wet 22 points.

If it wasn’t for what Gary Lyon described as “quite possibly the worst umpire decision ever” Carlton’s Josh Bootsma goal from the square prevented the team from being the first and only ever team to go scoreless in the first half at the SCG.

Sydney’s team that only featured 13 players from their premiership winning side last year, kicked their lowest winning score since their 8.10-58 that won them the 2005 Grand Final.

In Craig Bird’s 98th career game, he already had a career high 28 disposals by 3 quarter time, and ended with 33 for the match.
In contrast, Carlton’s Eddie Betts managed only 6 disposals for the game, his lowest since he injured himself in round 18, 2008 against Adelaide.

Carlton remain out of the top 8 with 6 wins and 7 losses, and Sydney back-up after last week’s defeat to Port Adelaide by jumping back into the top 4.

Port Adelaide backed up last week’s victory against the Swans in convincing fashion, downing Collingwood over in AAMI Stadium by 35 points.

It became only the 2nd time ever where Port had beaten Collingwood in all 4 quarters (the other: R16, 1997 at Football Park).

Collingwood’s 7.9-51 was also the lowest score conceded by Port against the Pies (Previous: 58 from game above) and the lowest aggregate score posted between the two.

The Magpies have now lost 4 games from their last 5 matches interstate, after winning their previous 10.

Collingwood’s power forward recruit, Quinten Lynch, again failed to contribute on the scoreboard, making this his worst goalkicking season to date. The former Eagle has only kicked 5 goals from 13 matches this year, when by the same time last year, he had 21. In contrast, Sydney’s power forward, Kurt Tippet has kicked 4 in only 2 games.

The Power stormed home yet again in season 2013, confirming themselves as the greatest 4th quarter contributors in the league. Their 5.2-32 was 7th time this year the team has kicked 5 or more goals in the final term.

Port Adelaide now loom as possible finals contenders for the first time since dropping out of the 8 in 2007, as they now sit 7th. Sitting on the same amount of wins and losses (8 and 5) Collingwood are now in 8th position.

Melbourne Demons fans finally had something to cheer about on Saturday night, as their team held on from a fast finishing Western Bulldogs outfit to win by a nerve-wrecking 3 points. The Bulldogs, led by young Tom Liberatore who amassed 36 disposals for the game, kicked the final 7 goals of the game, after trailing by 44 points with only 13 minutes left in the last quarter.

The team snapped a 6 match losing streak against the Bulldogs (from R19, 2007), and it was the 3rd Victorian team they have beaten since round 22, 2007  against Carlton (others being Essendon and Richmond).

The Dogs 9.1-55 in the last quarter was the equal 2nd most points scored in a last quarter by a team that went on to lose by less than a goal.

Unsurprisingly, it was the 2nd highest amount that Melbourne have lost a last quarter by in a match that they won. (most: 39 in R9, 2005 v Carl)

The Dee’s had little trouble kicking goals, as their final score of 15.13-103 was only their 4th total of a century or more in their last 35 matches.

Perhaps the only other disappointment from a Melbourne perspective (despite that they conceded a ridiculous amount in the 4th quarter to an ordinary team) was the crowd size. The 21,217 throughout the stadium was the lowest attendance at the empty MCG since round 8, 1987.

Melbourne remain off the bottom of the ladder, 2 wins in front of last, GWS, in 17th place, whilst the Dogs aren’t looking much prettier, as they sit one above the Dees in 16th place.

This week, the Bulldog’s cannot blame their shocking loss on the bye, although Carlton may try. In this week’s Footy Graph I looked at how the teams handled the Bye Rounds in 2013, and saw that many teams found their rest upset their game, and then went on to lose the following week. One could argue that many teams took the Bye too easy, and were shocked when they were sent to face a team that had game practice less than a week prior.

However, I do believe, and I’m sure many sports scientists, players and coaches would back me when I say whatever margin is slightly lost in the short term, is much more beneficial in the long term and for the rest of the season.

Another thing to note in this data, is that it could’ve all been pure chance as to the quality of opposition the team faced the week after. With such a small sample size in 2013, this data can be unreliable and perhaps co-incidental.

That said, I still found it very interesting that such a gap did exist in the modern world of AFL science, where every step is taken to ensure a fit team will have the greatest chance of winning in every match played.

Could it simply be that the teams that lost (even when they were favored to win) had just ‘forgot’ how to play a game of football like an 8 year old forgets how to write neatly?